Dortmund breeze past Schalke in the Revierderby

I spent my Saturday afternoon watching the highly anticipated Revierderby, in which Borussia Dortmund welcomed FC Schalke 04 to an empty Signal Iduna Park. I kept an eye on a certain few players that Chelsea have been linked with in the past few months, as well as doing a bit of tactical analysis of the match. 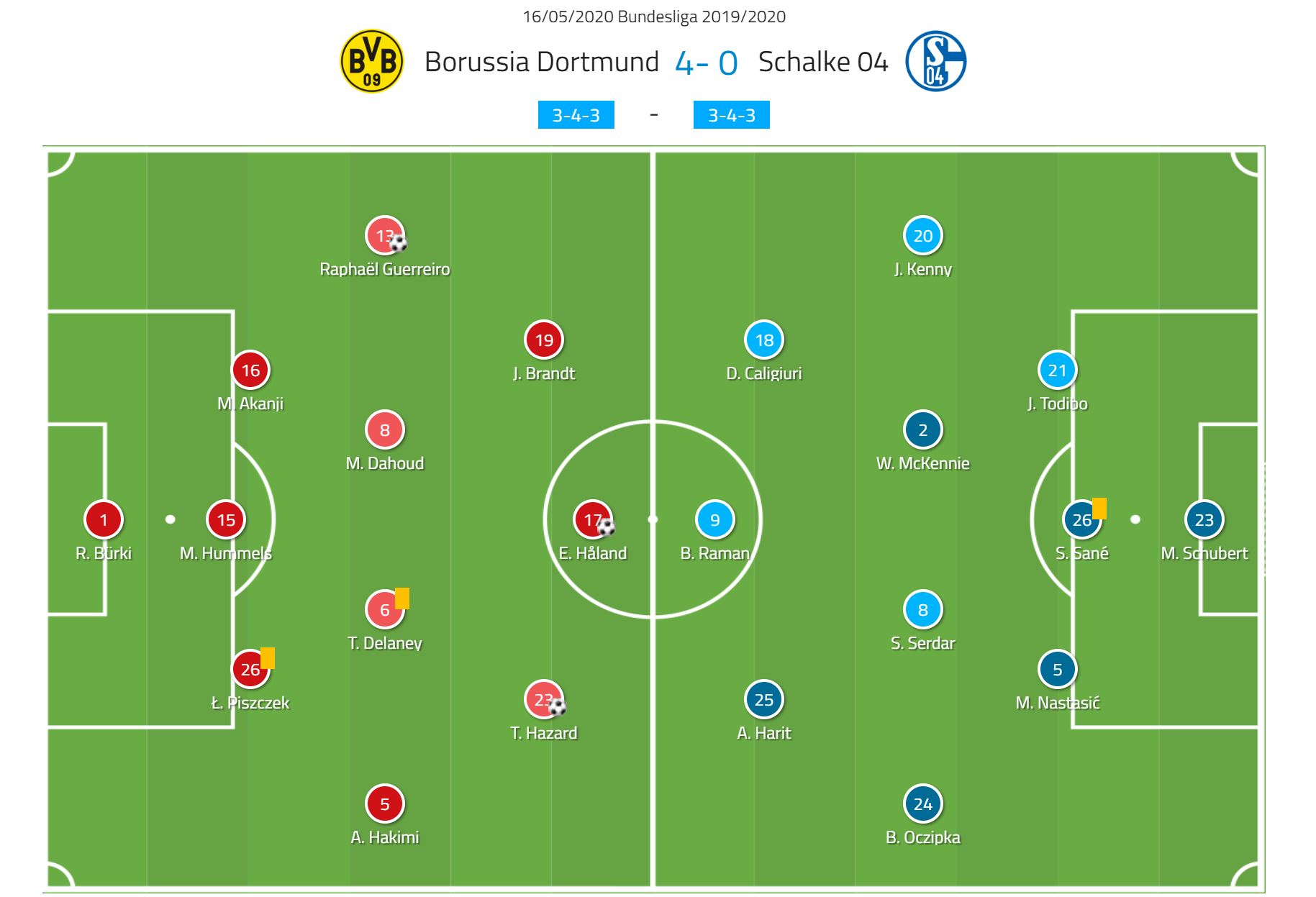 Both sides lined up in a 3-4-3 formation, with the likes of Raphael Guerrerio, Achraf Hakimi and Thorgan Hazard starting the game for Dortmund. Jadon Sancho was left on the bench due to fitness issues. For Schalke, Everton loanee Jonjoe Kenny started the game, as did USMNT International Weston Mckennie, who has recently spoken about his desire of playing in the Premier League in the future.

Schalke, managed by former Huddersfield boss David Wagner, were poor defensively. They pressed high but ineffectively – Dortmund were able to bypass the press easily and then exploit the half-space in behind Schalke’s wing-backs, which Dortmund and Julian Brandt in particular were happy to take advantage of.

Dortmund’s first goal was a prime example of this. Right-sided centre half Łukasz Piszczek beat his man with ease on the halfway line and slipped a pass into Brandt, who had dropped into the half-space, which was formed by the Schalke left wing-back pressing tight to Dortmund’s right wing-back. This meant that Schalke’s left-sided centre back had to press Brandt, leaving a large gap in behind him for Thorgan Hazard to run on to Brandt’s flick to.

This meant that Hazard had lots of time and space to measure an excellent cross into the box which Erling Håland finished with aplomb.

The best players on the pitch were all on the winning side, however one Schalke player did catch the eye.

Weston Mckennie recently announced to the world that his ‘next goal is to play in the Premier League’, and from his performance in the Revierderby it is clear to see why the American has high ambitions. He played on the right side of central midfield, doing well over the course of the game to be positionally disciplined. He also read the play very well which lead to him making four tackles and five interceptions. The 21-year-old was unable to do much on the ball, with Schalke only having 40% possession, but still impressed with his display on the whole.

The German really controlled the game, notching two assists and playing a large role in the build-up play of the other two goals. The 24-year-old played with so much confidence that he backed himself to pull off a fantastic audacious flick from Hummels’ clearance that wowed twitter.

That flick from Julian Brandt was the definition of sublime. Superb talent.

There were multiple contenders, but in my opinion Julian Brandt was the ‘Man of the Match’ in this Revierdeby with a fantastic all-round performance.

(Image Source: The Korea Plus News)

The Portuguese left wing-back was given lots of space to play by Schalke and he certainly made best use of it, getting on the scoresheet twice. His first goal was particularly impressive, letting Brandt’s perfectly weighted ball run across his body before taking one touch and placing it in the bottom corner from a difficult angle. It says a lot about how much freedom the wing-backs have in Dortmund’s system, that Guerrerio was nearly on the halfway line when Markus Schubert’s poor clearance was picked up by Mo Dahoud, and he got forward as quickly as he could to get himself in a goalscoring position.

Although Dortmund’s defenders didn’t have much actual defending to do, they certainly had a lot of the ball at their feet and Akanji stood out in that respect. Supremely confident with both feet, the Swiss’ decision making was always spot on. He boasted a 92.5% pass completion rate, the highest of anyone on his team. Akanji would probably not even have started the game, had Dan-Axel Zagadou been fit, but the 24-year-old produced a very assured display and will be keen to maintain a run of good form going forward.

Overall, Dortmund outclassed Schalke with both some fantastic individual displays and a cohesive team performance. The home side limited the Royal Blues to only 0.3xG the entire game, while putting up 1.6 of their own.

Did I miss any outstanding performances?