Who is generational talent Kai Havertz, and why should Chelsea go all out to sign him?

For months, the talk surrounding football has largely been of the huge effect that the current global pandemic will have on the market. Supposedly even the biggest teams would have to scale back on their usual splurges, forced to be stingy by the potential loss of broadcasting revenue as well as the lack of any match day income. In total, Deloitte have predicted Premier League sides alone could lose up to £1 billion over two seasons as a result of the pandemic. However, it seems like one owner didn’t get the memo. Having stolen Timo Werner from underneath Liverpool’s nose by activating his £53 million release clause when the Reds were unable to, it seems that Roman Abramovich could attempt to prise away another of Liverpool’s supposed targets, and one of the Bundesliga’s brightest talents in Kai Havertz. This spending spree, which will also probably include a left back in either Ben Chilwell or Nicolás Tagliafico, in a time where other clubs are faltering, could set up Chelsea to be a force to be reckoned with over the next 5-10 years. And Havertz could be the star. 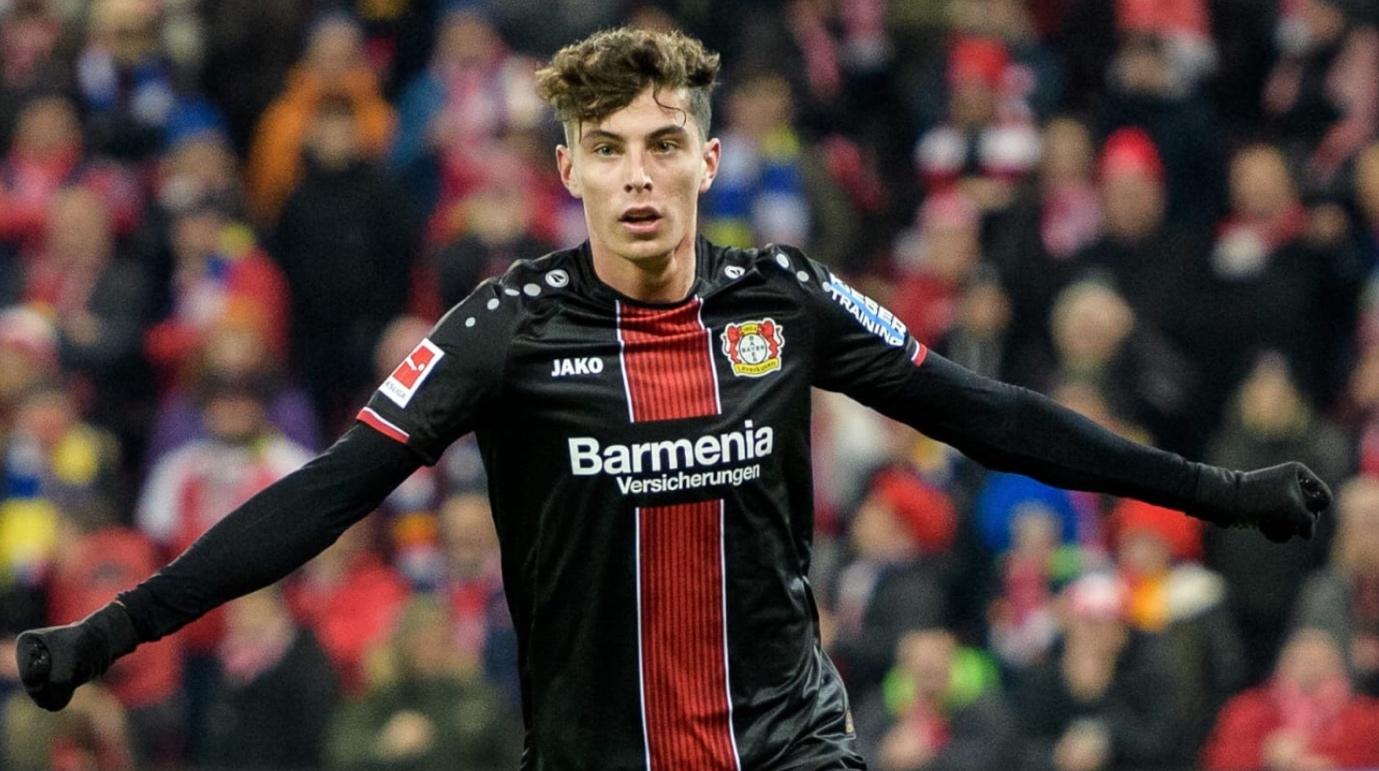 The return of elite football arrived earlier in Germany than the rest of Europe, causing a new audience to flock to watch the Bundesliga in search of their football fix. With the spotlight seemingly firmly fixed on Jadon Sancho, Erling Haaland and Robert Lewandowski as Borussia Dortmund and Bayern Munich fought for the title, it was Kai Havertz who stole it. He has long attracted interest from European powerhouses, with Liverpool and Bayern Munich seemingly chief amongst them, but his back-to-back braces in the opening two games following the forced break in the season showcased his talents on a much larger scale, perhaps prompting Abramovich to amp up his pursuit of him.

Before we dive into the youngster’s incredible stats, it is worth discussing his personality. When making a big money move to the Premier League, having a strong mentality is essential. As the British media wait for you to slip up spectacularly, you have to shut out the outside world and hit the ground running. Despite still being 20 years old, Havertz is in his 4th season of regular game time at Bayer Leverkusen. Making his Bundesliga debut at the age of just 17 years and 126 days old (at the time making him the club’s youngest ever league debutant), he has shown remarkable mental strength to earn his place and keep it from such a young age and with such media attention focussed on him. More impressive still is the fact that he has led Leverkusen as captain on 5 occasions this season in the absence of club captain Lars Bender, going further towards proving that he truly is an old head on young shoulders. 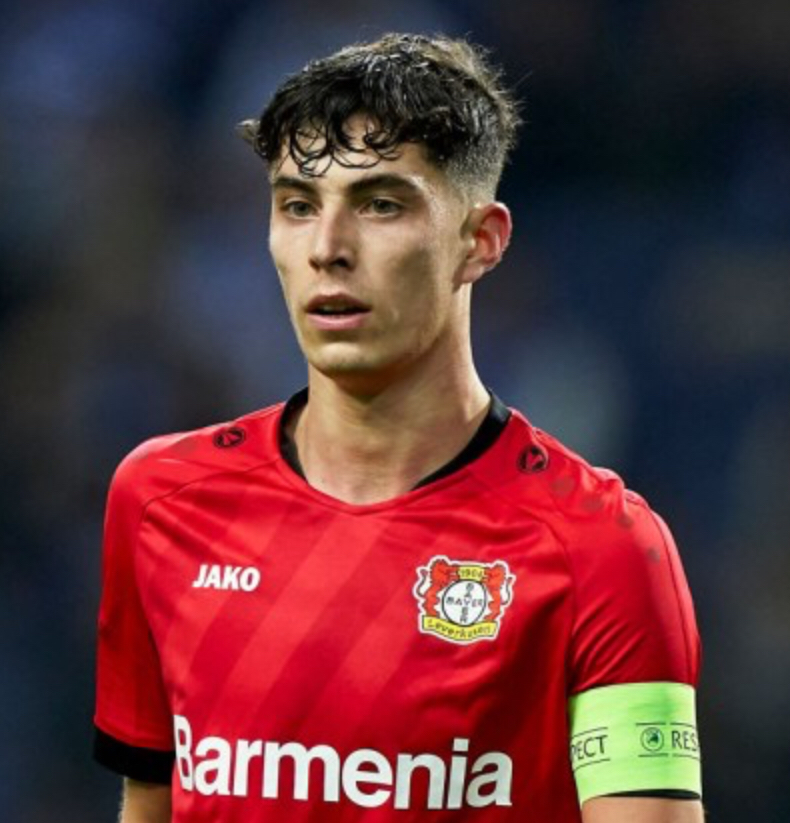 However, the most encouraging aspect of Havertz’s mental make-up is his ability to keep going in the face of adversity. He came into this season with the pressure of having to follow up a 17 goal haul in 2018/19 (with 4 assists to his name as well, despite him playing as a midfielder/winger), and initially struggled. In fact, he only netted twice between the start of the season and 2020, with those goals coming across 14 league starts. The media scrutiny that follows a superb breakthrough season looked to be getting to him, but the German persisted and has dramatically turned his form around. Having scored in the first game back after the winter break, he has amassed a huge 9 goals and 4 assists in 12 appearances so far in 2020, making him the Bundesliga’s third top scorer since the turn of the year, behind only Lewandowski and Haaland! It is clear that Havertz can handle the burden of huge expectation, which will be vital if he is to join Chelsea in a big money move. So, he can handle the psychological aspect of the game, but how is he with the ball at his feet?

Not only is Havertz’s goal contribution haul impressive –  he has bagged 11 goals and 5 assists in 26 league appearances to date – but look closer at his underlying numbers and you will understand that his current red-hot form is no fluke. He is the fulcrum of all Leverkusen’s play; whether he is playing as a false 9, a right winger or as an attacking midfielder, and has been a crucial component of one of Germany’s most exciting offensive forces. His 2.1 chances created per league game rank him 9th in the league, and are only 0.2 fewer than Jadon Sancho, who has 11 more assists than Havertz. This implies that in a more clinical team, the German would be racking up huge assists numbers. The potential of seeing him play with the deadly Werner (who has netted 25 league goals this campaign so far), therefore, is mind-blowing for all Chelsea fans!

On top of being an elite chance creator, Havertz is also excellent at ball progression. Wherever he is playing, he will always drop deep in search of the ball and then force his team up the pitch, with his average of 46 passes per game (at an 86% completion rate) very high for an attacking player. For context, his teammate and usually the man who plays on the opposite wing to him, Moussa Diaby, makes only 20 passes per game, and the highly involved Sancho manages 48. His 2 completed dribbles every match also make for impressive reading, and are more than both Willian and Hudson-Odoi (our right wing options this term) currently average. He is also a player who will constantly make defences uncomfortable, as he naturally drifts between the defensive lines, willing to receive the ball all over the pitch, with his marker unsure of whether to be drawn out of position and follow him (opening up space behind the defensive lines for pacy players like Werner or Hudson-Odoi to exploit) or to sit back and allow Havertz to work his magic. He has the ability to take a touch and make a sensational cross-field pass, or beat his man before feeding a teammate or going alone. With such incredible match intelligence at only 20, Havertz’s potential truly is incredible.

Another facet to Havertz’s game is his aerial presence. Standing at around 6 foot 2 inches (or 1.89m) tall, he boasts a physical advantage on many central defenders, and is only 2cm shorter than Tammy Abraham. This allows him to win 1.4 aerial duels per game, behind only Abraham and Giroud (on 3.2 and 2.9 respectively) for non-defenders in the Chelsea squad. His aerial prowess has helped him bag 2 headed goals this season, the same figure as Tammy, despite only making 7 appearances as a number 9. His physique should cause opposition defenders all kinds of problems, as he is a threat from set pieces and he can hold up the ball well, which is vital in a relatively short squad (the 7th shortest in the league). He also happens to be left-footed, something none of our wingers are, and therefore could play on the right wing and cut in should Lampard require it, a trait which makes him even more desirable to the Chelsea board. 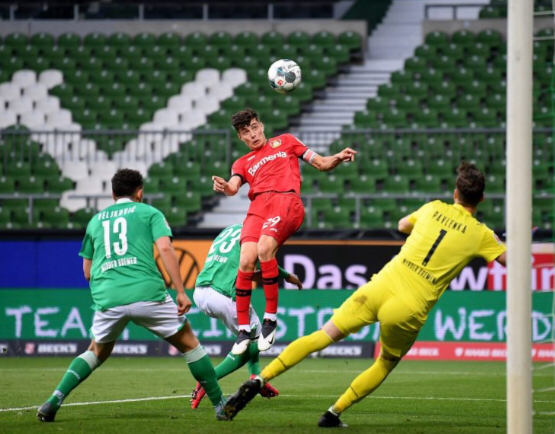 So Havertz is a brilliant creator, a fantastic dribbler and a threat in the air, but what are his areas of weakness? Well, one aspect of his game that he could easily improve on is his shot volume: as he has managed only 1.9 shots per game this season, the 25th most in the Bundesliga. Part of the reason his average shots per game are low is that he has only recently started playing as a false 9, but even as an attacking midfielder I would expect him to get off more efforts at goal every game. For example, Mason Mount – in his first season of Premier League football – has made 2.3 attempts on goal per game as an attacking midfielder, and should continue to improve on that as he gets older. If Havertz can take more shots per game, it is only logical that more goals should follow. He is also quite regularly dispossessed, at an average rate of 2.7 times a game, which would rank joint top in the Chelsea squad with Pulisic. However, this could be because most of Leverkusen’s attacking moves go through him, and so he is bound to make a few mistakes when he is constantly trying to force openings for his team.

Having seen a breakdown of his game, we know that Havertz is a star and has huge scope to improve at only 20 years of age. Put simply, he could become a truly elite player in the future. What might concern a lot of Chelsea fans, however, is where he will fit in. With Ziyech and Werner (hopefully) due to arrive this summer, and Ruben Loftus-Cheek coming back from his lengthy injury lay-off, the competition for places will be monumental, which could push the squad on as a whole, but could also lead to some significant player departures.

The German international is capable of playing a number of roles, with his versatility another reason why he is sought after by so many sides. He is able to play as: a free number eight in a 4-3-3 (similar to how Mount plays when in central midfield), a central attacking midfielder in the hole behind the striker, a right winger, or as a centre forward. Such versatility should offset any worries about him keeping any particular player out, as Frank can move him around regularly as Peter Bosz has done this season at Leverkusen. With Ziyech and Hudson-Odoi both capable of playing on the right wing, the ideal place to play Havertz would be as a number 10 in a 4-2-3-1 behind Tammy and with Werner cutting in from the left wing. This would be a devastating attacking unit, arguably one of Europe’s best, and would make the most of Havertz’s creativity, ball progression and finishing (as he can arrive late in the box to tuck shots away). 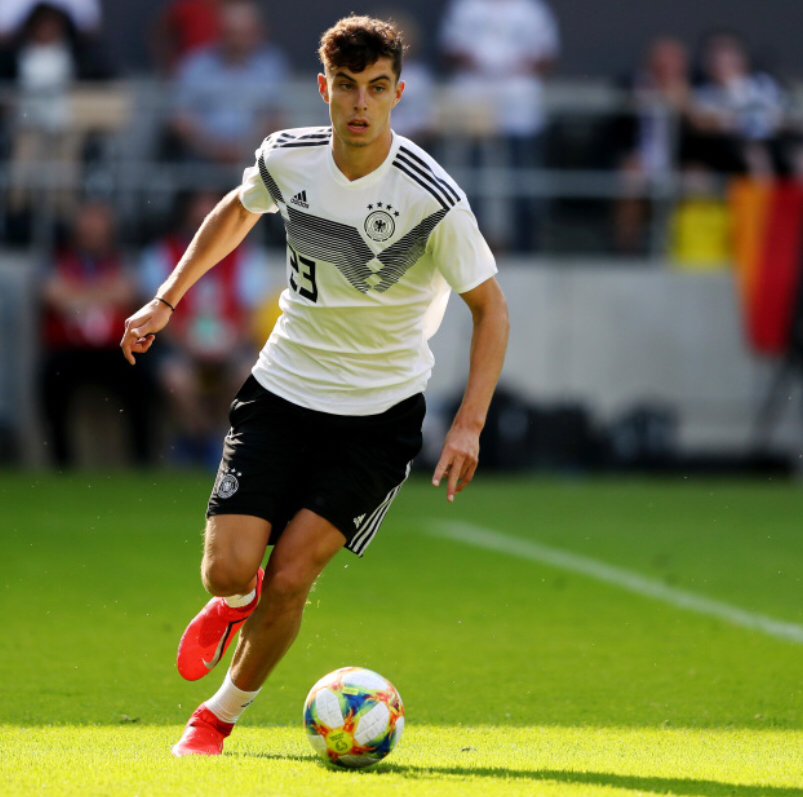 However, if Lampard opts for a 4-3-3, as he has tended to do this season, Havertz would be more than able to play as a number 8, perhaps with two more stable central midfielders beside him allowing him to push forwards (perhaps N’Golo Kanté and Mateo Kovačić). The possibility of a 2 striker formation has also been thrown about recently, and is something that could prove really exciting. Should we play a 4-4-2 with Tammy and Werner spearheading the attack, Havertz could possibly be paired in a midfield pivot with the ridiculous defensive shield that is N’Golo Kanté, which would allow him to get forwards regularly. Such squad selection headaches can only be a good thing for Frank Lampard, who wants his players to fight for their places, which will improve the long-standing issue of mentality and motivation in the Chelsea dressing room. We must also assume that the board are backing Frank Lampard as part of a 3 year plan (as per The Athletic) in which Chelsea are winning major honours by the conclusion of the 2022/23 season, and if Lampard has sought out Havertz and Werner, I am confident he knows exactly how he wants his side to lineup with them in next season.

Havertz has handled the pressure of being his club’s star man as a teenager, as well as being their captain, and his 59 goal contributions in 114 Bundesliga games before turning 21 is incredibly impressive. When we add in his mental toughness and ability to come back firing following a scoring drought, as well as his Champions League experience and 7 international caps for Germany (including a goal), it is clear that Havertz is a must buy. With other clubs seemingly incapable of meeting his rumoured €80-100 million valuation, Roman Abramovich could play on Havertz’s eagerness for a new challenge by being his sole realistic suitor this summer. If he manages to secure two of Europe’s most talented players in one window (not to mention Ziyech and a left back), Abramovich could create a dynasty which leads to years of Chelsea success!